Can I DIY a retaining wall? Retaining walls look pretty easy to build. All you really need is a shovel, some retaining wall blocks, and some gravel, right? We wish it was that easy, however there is a lot of things that go into building a retaining wall that homeowners do not think about.

Here at Back 40 Landscaping we are experts in building retaining walls, being trained and certified by Allan Block themselves. 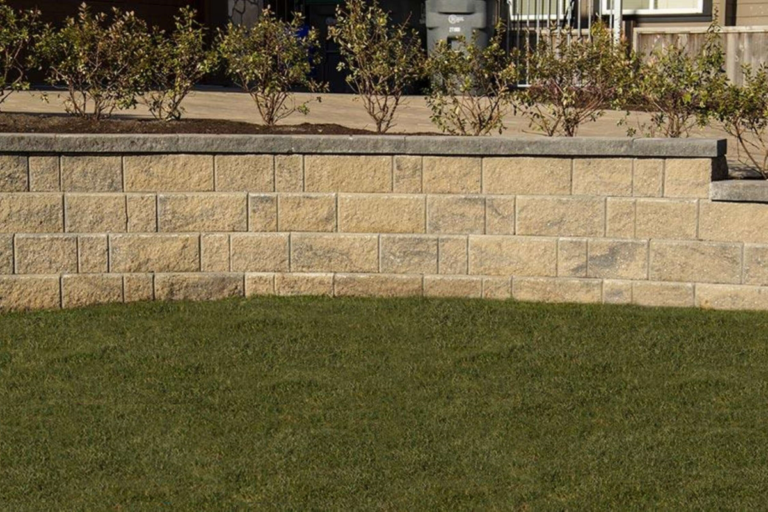 What does a retaining wall provide a homeowner?

Most people think that all retaining walls do is hold back soil, but they do way more than that!

A Focal point for any landscape

A retaining wall is a focal point to your space (whether you want it to be or not). Retaining walls require a substantial amount of material to be built, and stand out in any landscape. They are hard to hide!

Design elements, like having a gentle curve in the wall, a wall that integrates into the side of your home really well, lights in the caps, and a flower bed in front, all increase the beauty of the landscape, and give the yard a focal point that really stands out. Because of how prominent walls are to our space, they need to be built accurately, or your focal point turns into an eye sore.

A wall that provides peace of mind

When there is a retaining wall in your yard, the fear of it falling over and damaging your patio, pool, or valuables is very real. Retaining walls hold back A LOT of soil, and if they are not built well, fail. When a wall fails, you risk losing not only the soil that the wall is retaining, but valuables that are around the wall, or even worse, your home!

What is even scarier is that if children or pets are playing on, in front, or near the wall, they could get seriously hurt. A wall that you know is 100% strong that is going to last 100+ years gives homeowners peace of mind.

That financial stress can be from having to rebuilt a patio, or pool deck that the wall has damaged, or even paying for medical bills if someone has gotten hurt. Walls that are done by someone without the proper education and training have a high risk of failing. 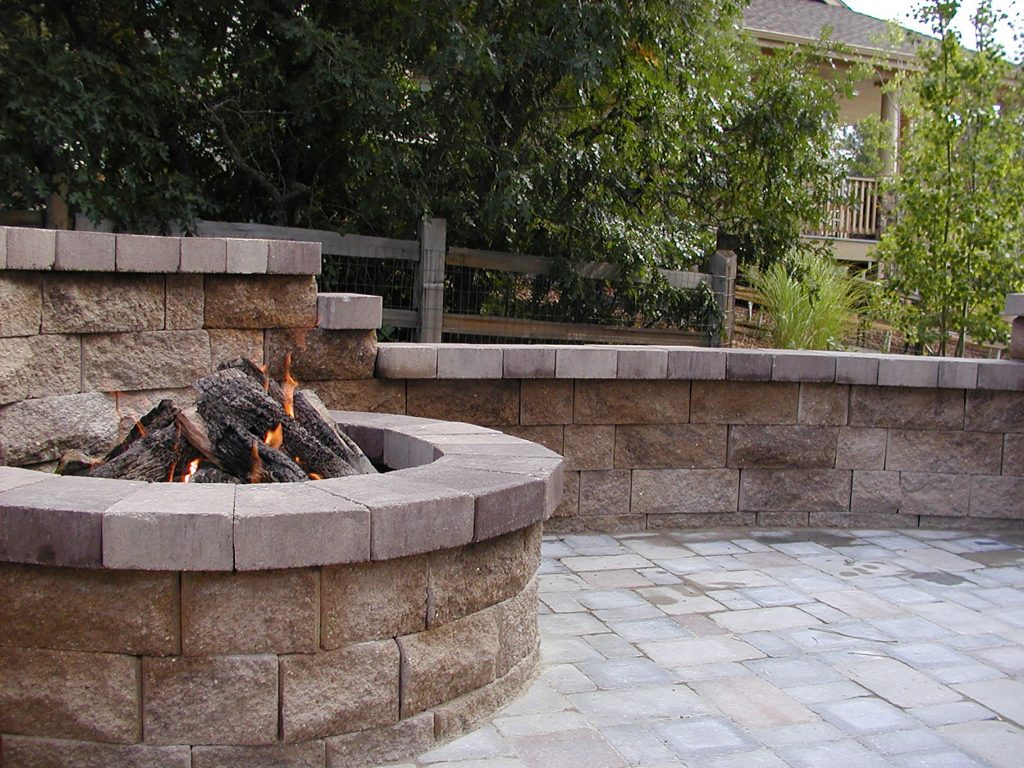 This may sound obvious, but where you put your retaining wall makes all the difference in how much space you are able to gain in your landscape.

Flat, useable space in your yard can be maximized by putting the retaining wall as far back into the hill that you are trying to retain as possible.

When maximizing your space, you are also doubling or tripling the amount of soil that will need to be excavated, and hauled out from your yard. Without the proper equipment to haul soil out, the area will be cheated, and you will not be getting as much useable space as you could be.

This has to be mentioned, since this is the main purpose of a retaining wall. Retaining walls hold back wet, heavy soil for 50-100+ years. In the Fraser Valley having a strong wall is only that more important because of the fact that we continue to get more and more rain each year, therefore putting more stress on our retaining walls.

If a wall is built incorrectly, it will not be able to withstand that wet, heavy soil, and will collapse. 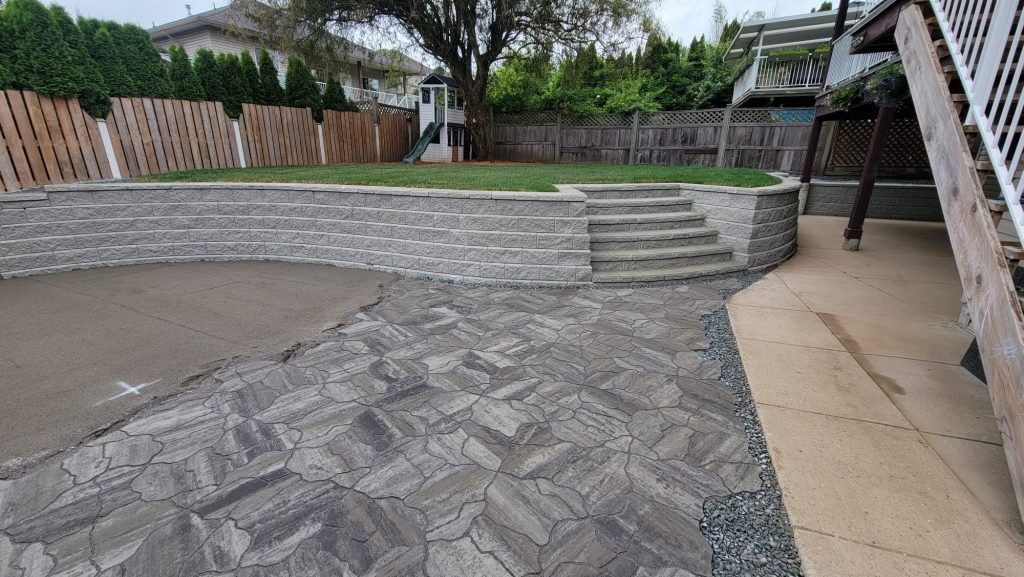 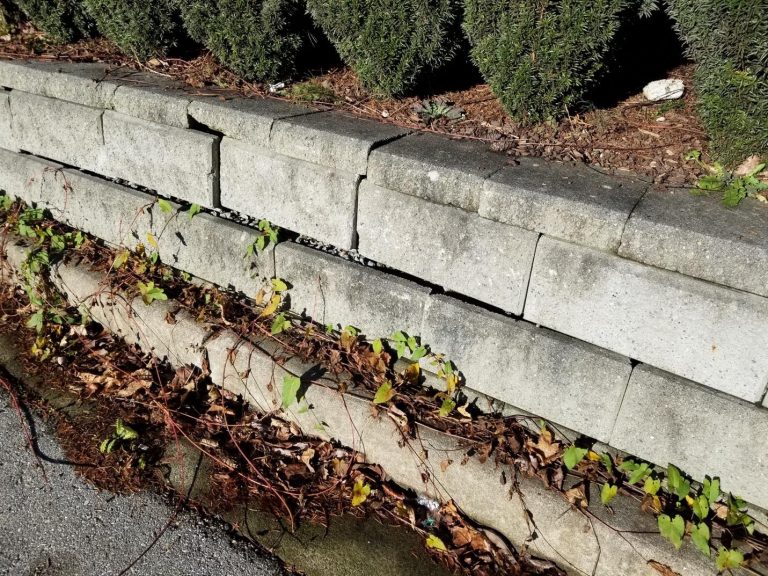 Why are so many retaining walls failing?

In general, most retaining walls that are being built are not living up to their full potential.

These walls are physically failing, sagging, have block separation, are sinking, and settling. Some of these walls are even leaning forward from too much weight behind the wall!

The vast majority of these retaining walls are built by so-called professionals who are building walls day in and day out. We would expect these walls to stand the test of time if they are being built by professionals, but we are seeing these major problems with retaining walls that have been built by uneducated, untrained contractors.

What equipment is needed to built an Allan Block wall?

For all retaining walls, even small ones, quite a bit of equipment is needed to get the job done. Now one could argue that you could get a wall built with a shovel and some wheel barrows, and you could physically build one, but will it be done properly and strong enough?

To have a wall that is strong, there needs to be enough soil excavated, and enough gravel brought in for a proper base, and to fill the back of the wall. This is impossible without the right equipment.

All said and done that is 103,000 pounds of material coming in and out of a yard for a fairly small retaining wall. That is a lot of material!

While a wall can be built without the necessary equipment, when excavating with a shovel instead of an actual excavator, the depth of excavation will always be cheated, therefore limiting the amount of soil that would need to be removed.

Without a tracked dumper, the amount of gravel being hauled into a yard would be less than needed to build a proper base, and have proper gravel put behind the wall.

Yes, Machines can always be rented to remedy this issue, but it takes practice and skill to use them. 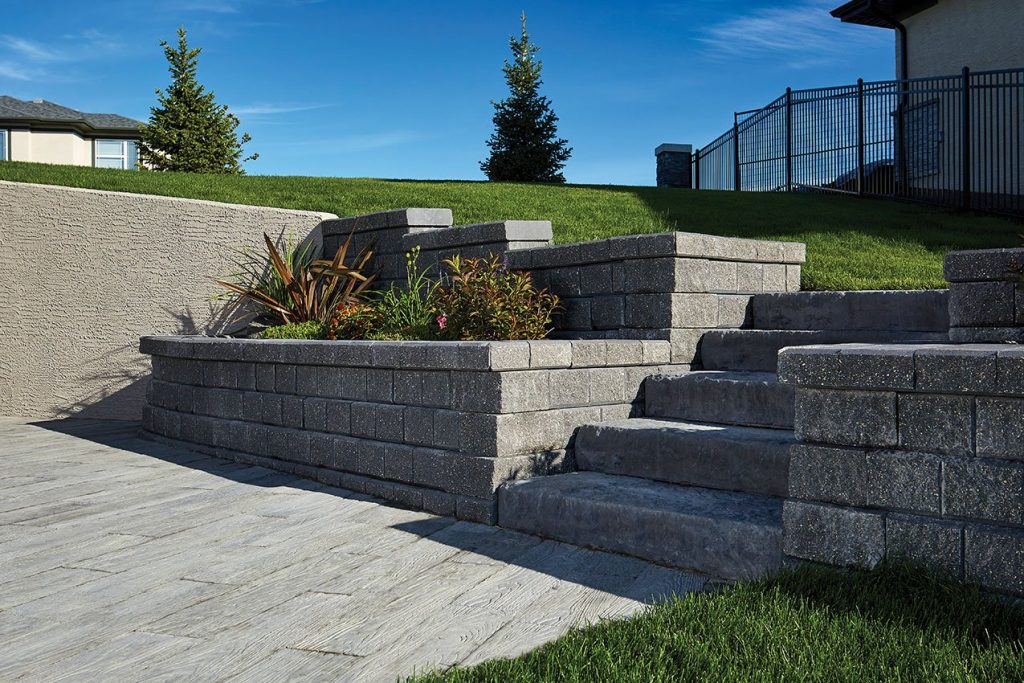 At the end of the day retaining walls provide useable yard space, an amazing focal point for your backyard, and provide homeowners with peace of mind. All of these factors come from having a wall that is built properly, to Allan Block specs, and can stand the test of time. A wall built with any less of these standards is one that will fail, and need to be replaced.